I was fortunate enough this year to teach a college-level Biology class here in Lima, Peru.  I love teaching introductory biology because for the first time, many students get a chance to learn about evolutionary theory.  It is a great privilege for me for me to talk about Charles Darwin, the voyage of the Beagle, and discuss  the tremendous elegance and beauty of the theory of evolution.  To be able to present topics on the natural processes behind the creation of biodiversity is especially exciting when one is in a country that is considered to be "mega-diverse", such as Peru.  The satisfaction that comes from being able to use the geography of Peru-its mountains, rivers, forests, and deserts, as examples of drivers in evolutionary processes such as speciation, is doubled for one who is fascinated by such things.   However, being in a large city such as Lima makes the rain forest seem almost as exotic as it is in my hometown of Cleveland, Ohio.  I often wondered, as I taught, if my Power Point presentations could really make the impact on students as being in the field has on me.  And of course, the answer is that no slide presentation can take the place of experience.
Today, the University of San Marcos Natural History Museum opened many of their prized collections (usually not on exhibit) to the general public.  The departments of mammalogy, herpetology, ornithology, archeology, and botany had biologists on hand explaining characteristics of, and differences among, species found in Peru.
What an amazing treat!  For the first time, I had a chance to view collections that are usually hidden from view, as did hundreds of other guests.  I had my 8 year-old daughter with me, and we were totally captivated by the sheer diversity of the varied collections.  Even though my personal experience as a biologist is mostly with mammals, I was especially enthralled by the bird collection.  My daughter and I stood, open-mouthed, in front of drawers containing hummingbirds ranging in size from bumblebees to swallows,  admiring the shimmery blues, violets and greens of the feathers, as well as the absolutely amazing array of beaks; long and pointed, like lances, shorter and curved like hooks.  What must life be like for a bird that has such a specialized beak that it must be in a life and death marriage with plants that it pollinates?  The tails on these small, shiny, gems of birds ranged from a "normal" bird tail, to exquisite long feathers that trailed behind the male birds, a "textbook" example of sexual selection.
And it was here that I felt chills running up and down my spine.  In 5 minutes with my 8 year-old daughter, I had seen and learned more about biodiversity in Peru and evolutionary theory than my students would in several lectures.  I could feel the excitement that the naturalists who had traversed the new-world , and Peru, and deduced the laws of nature.  It was a thrilling feeling.  I realized that many of my biology students (many of whom are going on to study business administration and not biology), would have benefited tremendously by visiting the museum, seeing at least part of the collections, and listening to the presentations given by the earnest and enthusiastic biologists, obviously proud to share this often overlooked part of Peru's heritage.
They would have remembered this visit for the rest of their lives.  The fact that the museum's incredibly diverse collection housed species that inhabited THEIR country would have made a visit invaluable, and I am now convinced that visits to this collection (the only one of its kind in Peru) will be a must for my future classes.
Peru is currently experiencing and economic "boom" of sorts, due to the vast quantities of gold, silver, and other metals found within the earth.  Along with this economic growth,mega- development projects such as the inter-oceanic highway, proposals for the building of dams for hydroelectric power (which would inundate thousands of kilometers of precious rain forest), new settlements, and continuing deforestation, are taking a tremendous toll on the species of plants and animals of Peru.  As I viewed the animals in the collection today, I thought about all that is lost when a forest is destroyed.  It was no longer an abstract concept; it was an experience that produced both learning and emotion. The type of experience that lasts in one's heart and mind.  These are the experiences that students need to have as Peru navigates toward its future, when these students will  be the entrepreneurs and leaders making important decisions for this country. The value of in-country biodiversity exhibits are incalculable.  This museum, along with others in tropical countries, should be appreciated as the custodian of an invaluable biodiversity library, the library of life.
The fact that a few weeks ago, plans were being considered to construct new classroom buildings and retail stores in the area where the collections are maintained (more on this in my next post), shows what a thin line exists between life....and death.  The future of Peru depends on maintaining its ecosystems and biodiversity intact. For this, biodiversity inventories and education are critical.  Economic booms come and go...but biodiversity does not, at least not within our life span or that of our species.

December 2009 proved physically taxing for me. I returned to my family home in Cleveland, Ohio for the holidays and visited several doctors. In January 2010 I was diagnosed with a recurrence of Lyme disease (infection of Borrelia burgdorferi, transmitted through the bite of a tick). I was infected with B. burgdorferi in late 1987 after working on a research projects investigating wild mice and white-tailed deer in Virginia (both of these animals are vectors for the transmission of this disease, and Virginia is confirmed as a Lyme disease state). In addition to B. burgdorferi, I was also infected with a red-blood cell parasite known as Babesia macroti. I am currently in Ohio receiving anti-biotic therapy.
Posted by Catherine Sahley at 7:13 PM No comments:

In mid-November, our project was visited by UNDP (United Nations Development Program) evaluators. Their job was to review how our workshops and project was proceeding, and most importantly, meet and talk with the communities involved in our project and determine what, if any, additional needs could be met.
Fortunately, turnout was very good, and the meeting was succesful. The women involved in the alpaca knitting workshops (with a artisan who comes from Ayaviri, Puno once a month) expressed their interest in continuing with their training. Some of the stories were especially moving..the interest and dedication to learning is very high, as it has been, since we started working in this National Reserve ten years ago (how time flies).
The main request was for minimal funding for bus fares for transportation to our workshops. We have some ladies from the village of Imata that were walking over five hours each way
to attend the monthly workshops.
We, at Conatura (http://www.conatura.org/) are continually touched by stories like these, many of which we have consistently seen and heard over the years. Whenever I get jaded by politics, huge megadevelopment projects that seem bent on contributing to the destruction of this lovely country, it is the individual stories of work and dedication that never cease to give me hope. I honestly believe that individuals coming together as communities is what will ultimately protect the wildlife and parks in this country and others.
It seems as though these ladies will get their bus fare so that they do not have to walk ten hours for a week-end class. In the end, it is a few dollars.....but a fantastic investment.
It has been a good week.
Stay tuned for the next post: The new Camelid Specialist Group newsletter of the IUCN (International Union for the Conservation of Nature) has recently been released, and their is much news regarding vicuñas and guanacos in Peru and in neighboring countries. As editor of this newsletter and contributor for the past couple of years, it will be my pleasure to share it with those who are interested and also offer my viewpoints on what is happening with wild camelids.
I also, in the near future, will be including my meetings and travels with Juan Gabriel, a Q'ero mesayoq (I guess "shaman" would be the term, though it is limited) from Cusco, Peru. He is a wonderful man who speaks spanish and quechua and whose main job, it seems, is to live in gratitude to planet earth. He visits Lima occasionally and soon I will be visiting him in Cusco. More on that in future posts. I am hoping to travel with him to the United States for workshops and classes in 2010 (but first I need to study with him a little bit more....).
Posted by Catherine Sahley at 9:43 AM No comments: 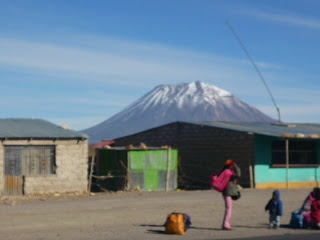 This past month has been busy for Conatura. Several workshops were completed with participants in communities in the Salinas Aguada Blanca Reserve. Two main objectives of the project are working with interested people who want to serve as local tour guides as well as working with women who want to produce artesanias or souvenirs made from alpaca fiber and also, we hope, from legally shorn vicuña fiber that is not acceptable for international fiber textile factories. We are hoping that vicuña fiber can utilized more efficiently and produce greater returns. 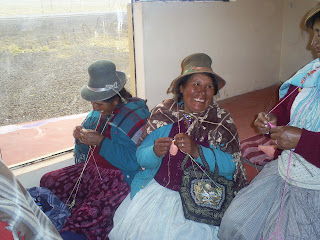 The area we are working in has many tourists that pass through to travel to either Puno, or more commonly, the Colca Valley. Many of these tourists take pictures of vicuña, alpacas, and occassionally guanacos, as they travel through the reserve, but local residents currently perceive no income from tourism that occurs within their community. That is going to change very soon....
Posted by Catherine Sahley at 6:29 PM No comments: